You know today in the world of knives the big “Buzz” word these days and for many years is “tactical.”

So what is a tactical knife?

What Is A Tactical Knife To You?

A tactical knife is designed for fast deployment and execution and is demanding of the high performance that the individual needs.

A tactical knife is also something that a user can deploy quickly with precision and if necessary force!

A tactical knife is used by many people as their EDC or everyday carry knife and conversely, the tactical knife can also be used as a survival tool, both urban and outdoor survival. It differs from a combat knife by being more diverse for use as a tool rather than just fighting.

Oh, and no matter what the number one thing that a tactical knife must be is sharp! It has to be able to perform under all kinds of standard cutting chores and adverse conditions.

The fact of the matter is that over the last twenty years just about every knife on the market today is considered to be “tactical” in one way or another.

I do not hear many people or writers refer to one hand openers as practical one-hand folders. They are called tactical one-handers or something close to that.

Today there is no hard-fast rule or definition as to what is and isn’t a tactical knife and that is for the reason that what a civilian would call a fixed blade tactical knife could be a far cry from what a soldier or swat operator calls a tactical fighting knife.

The fundamental qualification in form and function of tactical knives is that the person who is carrying it be able to get to it, deploy it, and execute the intended purpose for it being deployed in the first place with the use of just one hand and this hold true for a tactical boot knife, tactical folding knife, or a tactical neck knife.

So I thought we would take a look at some of the options that you will want to consider before buying a tactical knife. 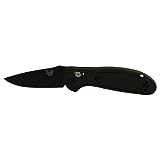 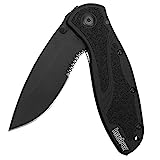 What Kind Of Blade Do You Need?

The way in which you will be using the knife will determine this. Now, a plain edge is usually my choice as I don’t have need of serrations.

Some people will say that a plain edge is better for “push cutting.”

I do agree with this. Of the two types of edges, I will say that a plain edge is also the better choice when needing to make clean cuts and when accuracy is the desired result.

A plain edge will also give you the requisite extreme control to perform your cutting task.

A serrated edged knife is the better cutter when employing slicing cuts by where you create the cut by dragging or pulling the blade edge from the closest portion of the cutting edge closest to your hand and slicing toward the point of the knife.

What Kind Of Blade Shape Do You Need?

There are many forms of blade shapes in both folding tactical and fixed blade tactical knives.

There is also the tanto and the modified tanto.

The tanto and modified tanto is designed for the thrusting aspect and hence not the best choice for outdoor/woodsman type chores.

The tanto blade styles that I sell in my shop every day are the combat tactical/elite forces tactical knife styles. The people buying these types are not looking to go camping.

Now some people will add the clip point and modified clip point style blade shapes into our mix here and in my opinion I do not find clip point blade shapes to work in fixed blade tactical as you find them more in knives.

I will say however there was a time some 40yrs back when the first folding tactical used by many an army ranger and other soldier types was the good old Buck 110 folding hunter.

True story! Way before clips were around.

All in all the drop point is my choice in a tactical folder or tactical fixed blade as it has a really thick, stout point that makes it great for heavy work, but might not penetrate like a tactical tanto blade style.

When it comes to the tactical folding pocket knife which does you need?

I am not one to be politically correct and the fact of the matter is that no matter how much you spend, an automatic knife is just a switchblade.

Which kind of knife do you need for your tactical folder?

Automatics do open at the push of a button which is a good choice if you can’t manipulate a manual opener fast enough.

Of course, if you are a civilian and want to stay legal in the 49 or so states that make automatics illegal, you might want to check out assisted opening tactical folders and make sure that this is a legal alternative in your municipality.

survival type of blade will use a sharp point for whatever level of penetrating that it can do and will come in both single and double-edged versions depending on the level of “survival” we are talking about here if you get my drift!

The rescue style blade utilizes a blunted end or tip of the blade which makes it safer for certain first responders and rescuers to cut things like car safety belts or possibly even articles of clothing on a person without cutting the person.

Some of the rescue style tactical folders are also accompanied by things like seat belt cutters and glass breakers that you will not find on the survival tactical knife.

The tactical pocket knife is great for deep cover but may have limitations as to how fast you can deploy and execute with it.

On the other hand, the tactical folder with a pocket clip is much faster at being deployed.

Of course, you could do what I do and have one of each for different types of social situations and surroundings. Something to think about!

You will notice that there is a great amount of crossover when you are looking for the best tactical knife for you.

These crossovers are in the knife types and the uses for the knife.

Your everyday run of the mill bushcraft knife with a convex grind is a fantastic all-around knife for every day outdoors, but it is not suited for the tactical arena.

Before you rush out and buy that next “gotta have it” that you saw online or in a knife magazine, you might want to define what are the needs that you have and what are the uses you want your best tactical knife to do for you!

And when you find the perfect blade, just remember that there’s more tactical gear out there for your next birthday!